Scenarios allow the user to run different cases without overriding the base case in PetroVisor.  A scenario is the result of an algorithm with varying inputs "not written back to the database" (it is stored in the database, but not on the entity/signal).

The scenarios module gives an overview of the existing scenarios and can be accessed from the Scenarios tab in the Navigation Panel. 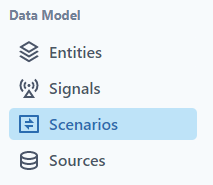 The user is able to run a scenario already saved in PetroVisor or add a new one.