The dashboard monitors plunger lifted wells performance, detects a number of operational challenges that wells might be experiencing, and suggests when plungers need to be replaced.

The summary tab gives an overview of the wells production performance with time as well as versus the set target production or forecast, the wells operational challenges or problems in the form of a problem score, and how close plungers are to a maximum historical mileage in the form of a plunger replacement score. 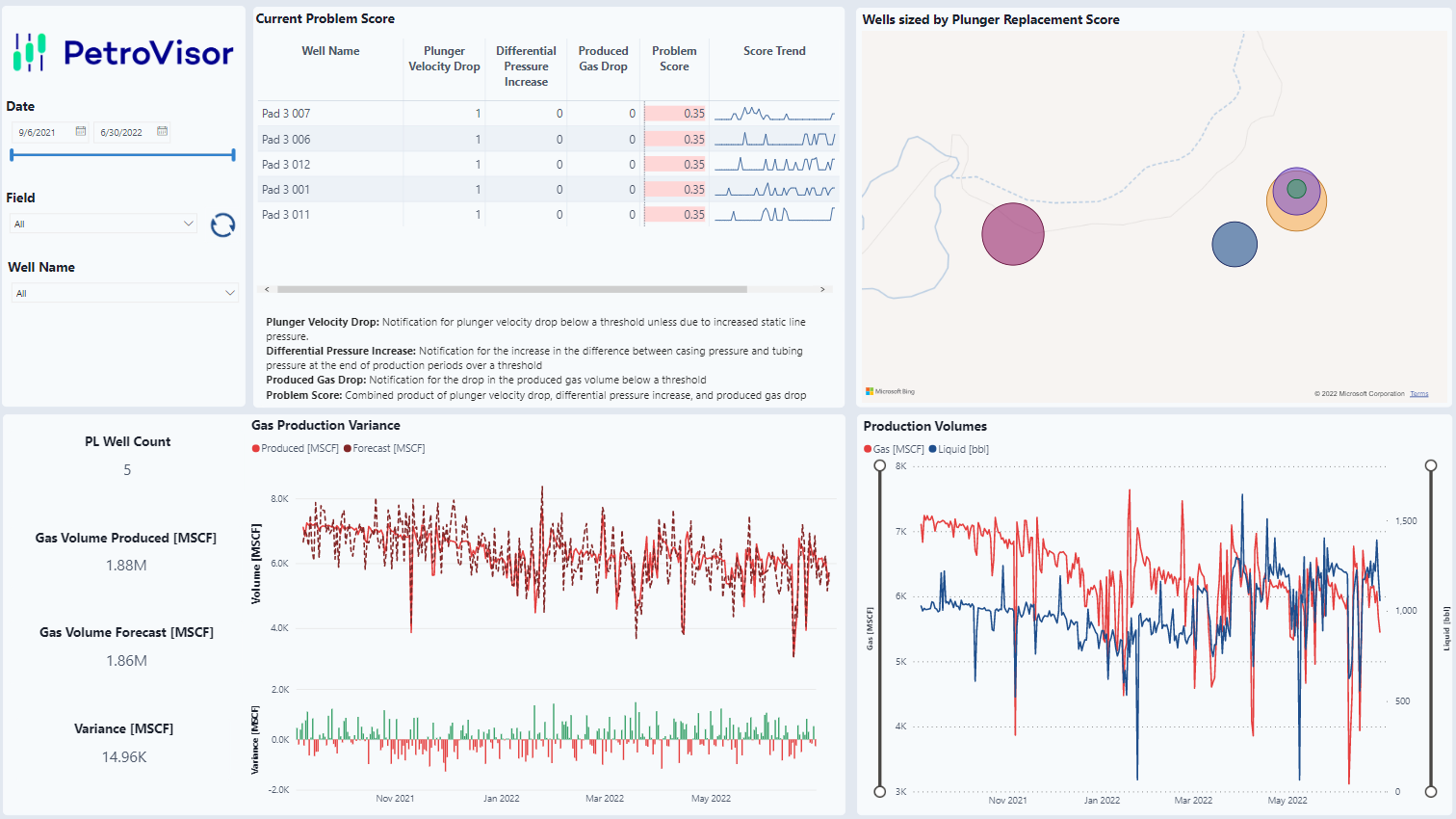 The dashboard has a slicer and filter on the left side of the screen. The filter allows the user to select specific dates as well as specific fields and individual wells. 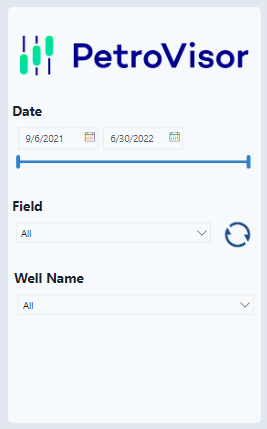 Ranks the wells based on the existence of operational challenges in the form of a problem score. The problem score depends on the detection of a drop in the plunger rise velocity, an increase in the difference between the casing and well head pressures at the end of the production period of plunger cycles, and a drop in the volume of gas produced per plunger cycle; all compared to expected values or thresholds.

The problem score is the weighted sum of the underlying input scores:

Where W1, W2, and W3 are customizable weights, whose default values are 0.35, 0.25, and 0.40 respectively. The problem score is not calculated for periods of flowline pressure increase 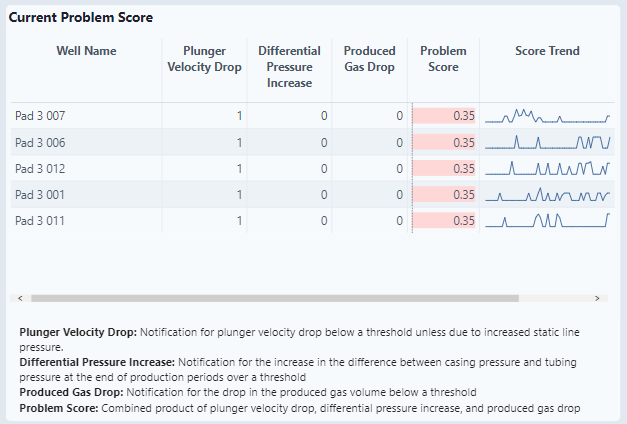 Plunger replacement score is a score reflects how close a plunger is to a maximum historical mileage at which a plunger run in the same well was replaced. On the map, the larger the circle, the larger the score. 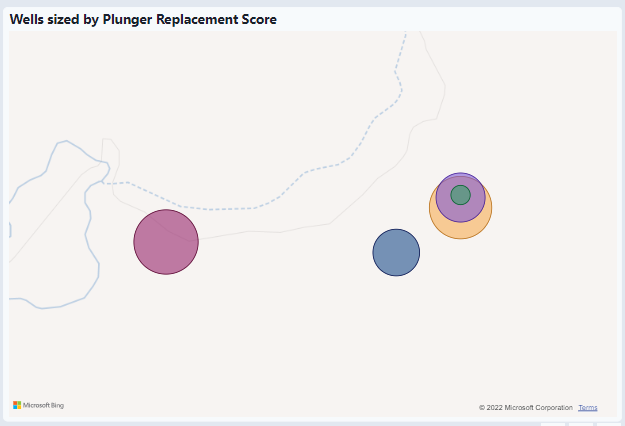 The graph shows the produced gas volumes, the target or forecasted gas volumes as well as the variance between those two over time.

The graph plots the produced gas and liquid volumes over time. 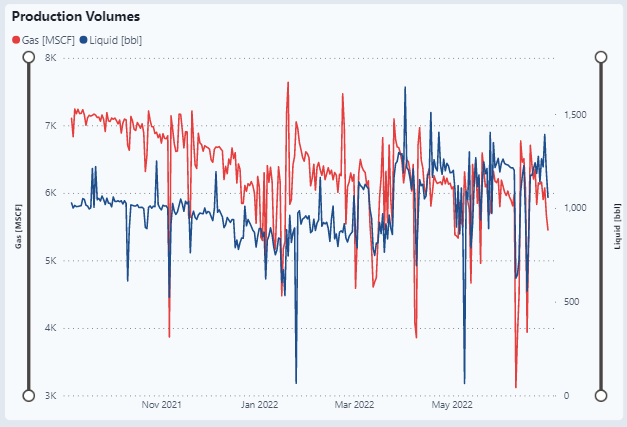 The Production tab focuses on the production in more detail. 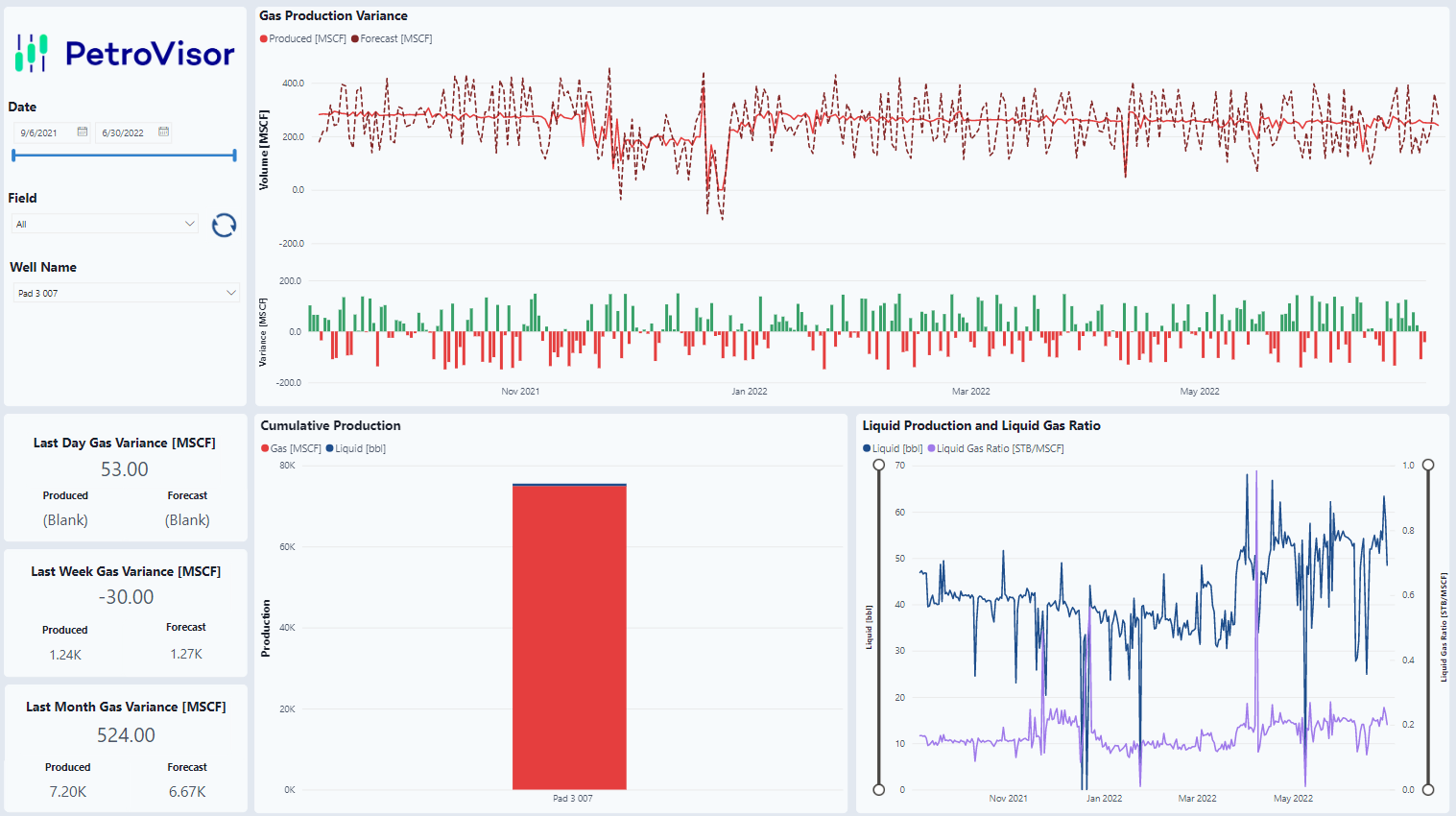 The graph shows the produced gas volumes, the target or forecasted gas volumes as well as the variance between those two over time.

Variances and volumes for the last day, last week, and last month. 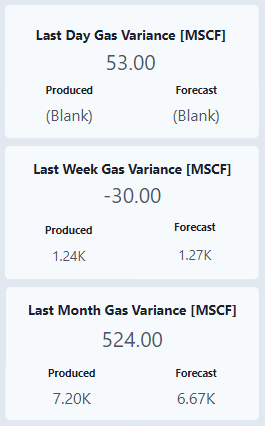 A bar graph that displays the produced gas volume per entity according to the date slicer. 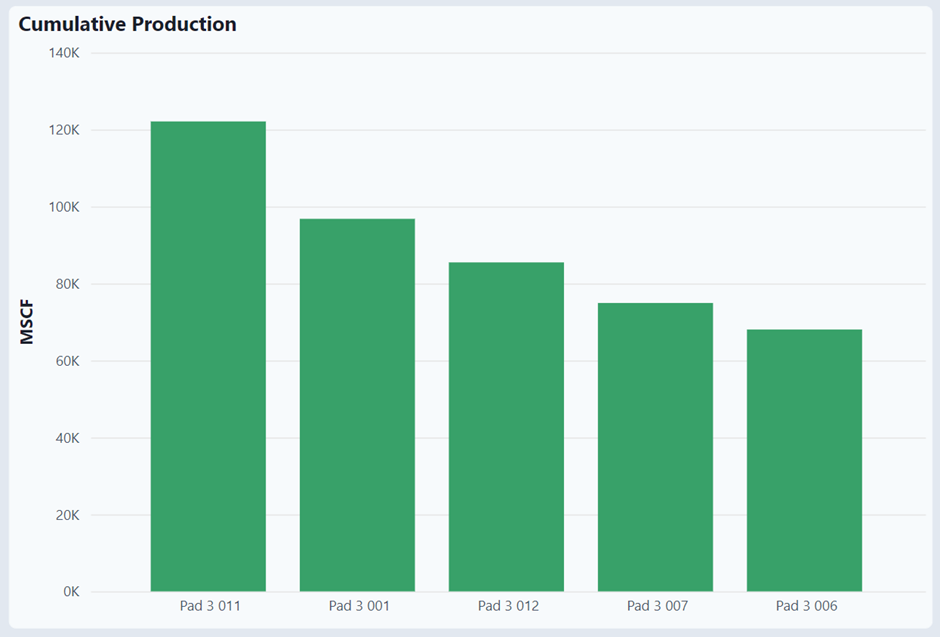 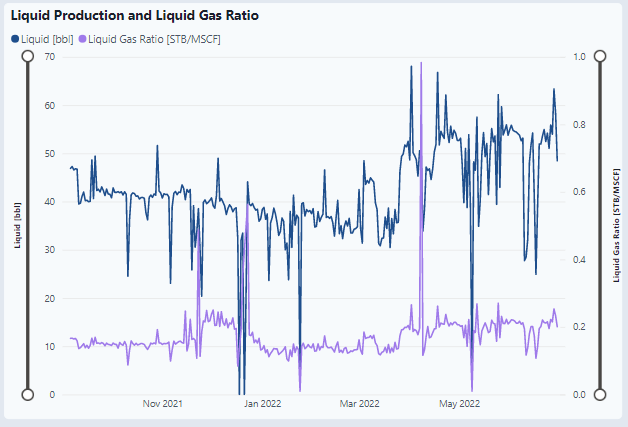 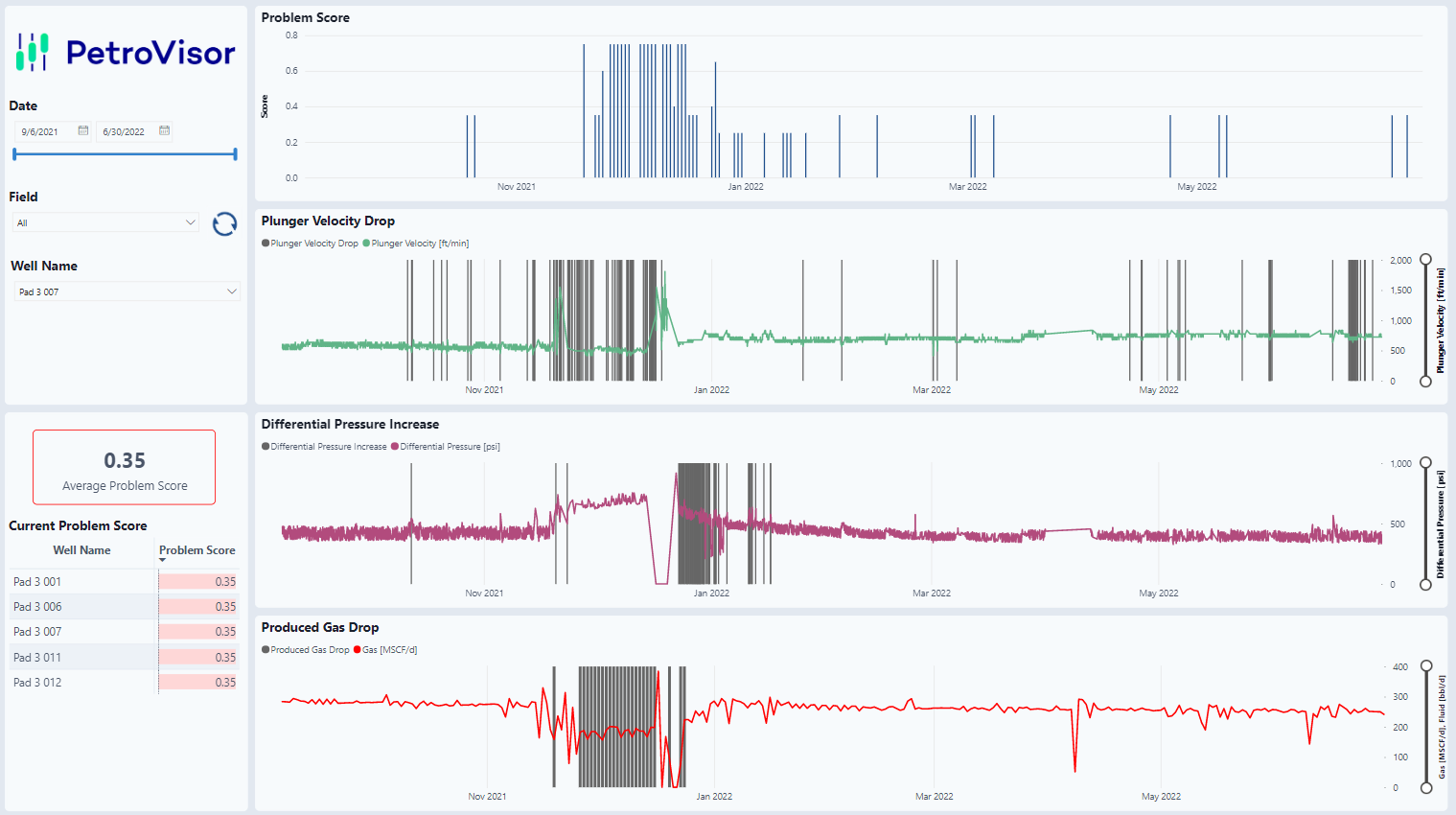 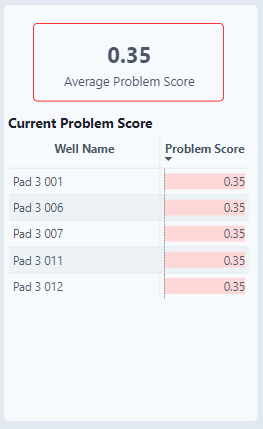 The problem score is a combination of Plunger Velocity, Differential Pressure and Produced Gas Drop with different weights.

The graph displays the raw data over time as well as the flags (gray bars) for an alarm.  The alarm for velocity is if it drops below 0.7 from the last 2-month average.

The graph displays the produced gas rate aggregated using minute data as well as the flags (gray bars) for an alarm.  The alarm for gas is if the moving average is less than 0.85 of the last week of data. 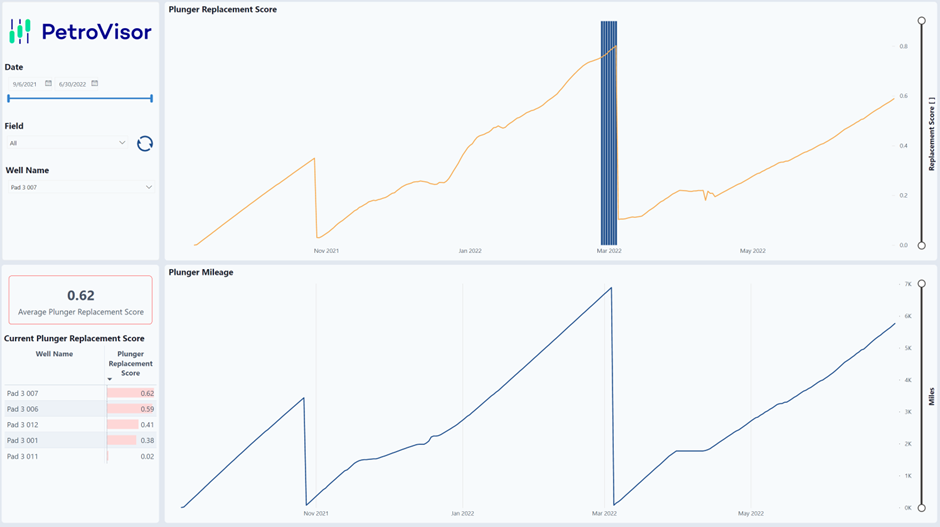 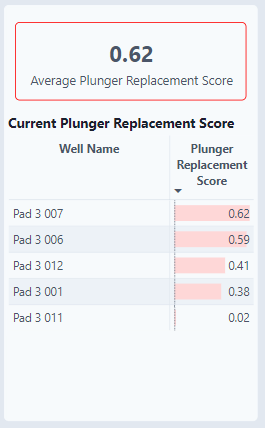 The Plunger Replacement Score is based on 0.7 of the Plunger Mileage and 0.3 of the Gas Production Rate.

The alarms start at 90% of the expected plunger milage.

This tab shows the operational parameters of the plunger lifted well for the last month on a 1-minute basis. Those are the gas production rate, the casing head pressure, the well head pressure, and the flowline pressure. In addition, the daily produced gas and liquid volumes are plotted in the same tab. 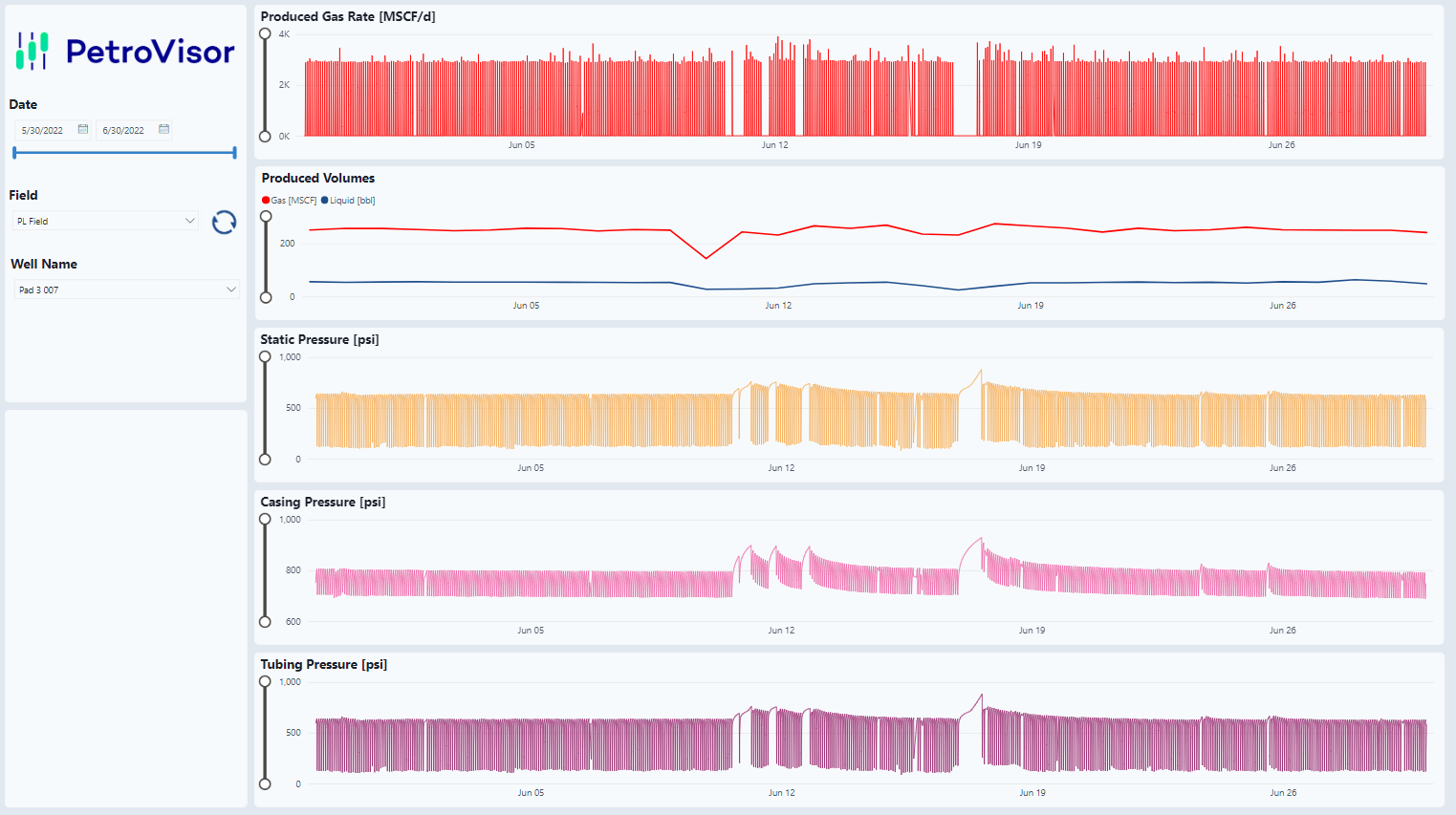