How do I write a data Cleansing Script in P#?

Open the P# Editor in the PetroVisor Workflow Automation Tool. Click on Options and select Cleansing Scripts in the Mode. 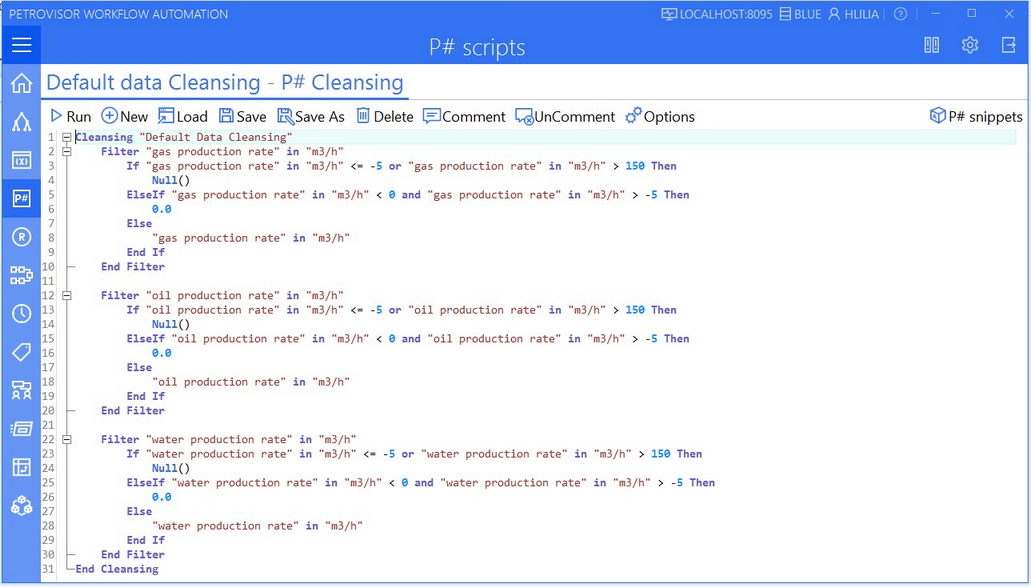 Each data cleansing script consists of one Cleansing part (e.g. "ESP Data Cleansing"), which contains all filters related to this part. Each filter can contain a set of conditions for one signal.

Then 0.0
Else "esp pump temperature" in "degC"
End If
End Filter

This example refers to the signal "esp pump temperature", as can be seen in the second line. The first If statement filters for temperatures smaller than -5°C, which will be cleared. A cell value of "Null()" means an empty cell. These values won't be written to the database at all.

The Elseif statement filters for temperatures between 0 and -5°C, which are set to 0.0°C. These values (0.0°C) will be written to the database.

The Else statemtnent, finally, states that all other values (leaving those >=0) will be kept as they are and written to the database.

This script removes all values from the signal "oil production rate", which are less than or equal to -5 or greater than 150 and sets all values between 0 and -5 to 0.0 All other values are not cleansed.

When editing or writing a new cleansing script, care ha to be taken that the conditions affecting a signal are not contradictory. Like "normal" P# scripts, cleansing scripts can be saved, loaded and deleted.

Note: Some rules are not available in data cleansing scripts, as they are hard-coded in PetroVisor's source code. These are: